Being inspired by an idea and putting your own twist on it is nothing new. Some games do more than borrow ideas, as we’ve seen with Balloon Fight and Joust. But more recently, Nintendo just dropped an exciting new IP called ARMS. This well received small arena 3D fighting game might have borrowed elements from their past rival, Sega. First, a look at ARMS, then feast your moist little eyeballs on Cyber Troopers Virtual-On.

Now, a look at Cyber Troopers Virtual On.

Clearly, ARMS is its own game, but I don’t think you can see the similarities between the two. 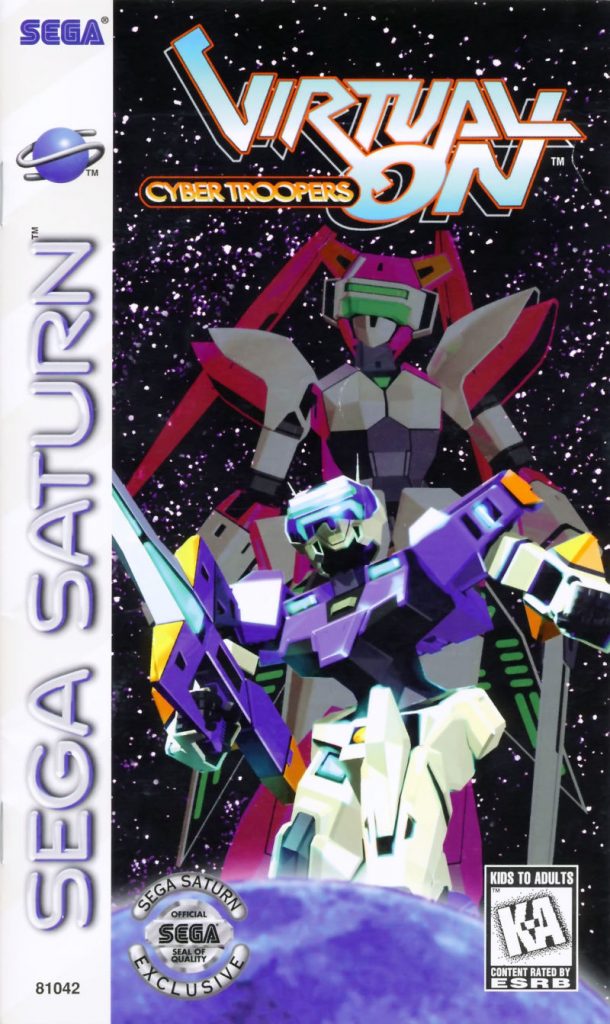 Virtual On, as it’s often shortened to, was a 1996 arcade mech combat game. It was developed by Sega AM3, the same group that brought us Virtual Tennis 2 and Crazy Taxi 3. Not known for many heavy hitters, but a solid team none the less. If you didn’t catch this gem in the arcades, or later on the Saturn, don’t worry. It’s been re-released a couple of times and is currently available on the Xbox Live Arcade and Playstation Network. It also spawned a sequel for the Dreamcast called Cyber Troopers Virtual-On: Oratorio Tangram, and Cyber Troopers Virtual-On: Marz for the PS2. 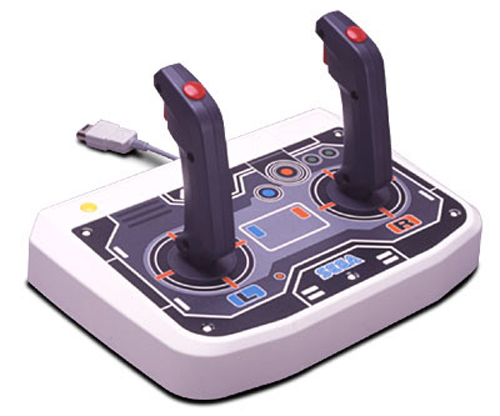 You could obviously use a regular Saturn controller, but the truly dedicated had the Twin Sticks. Released specifically for this game, this mimicked the arcade control scheme and allowed you to more convincingly “pilot” your mech. Using one stick foward, you would walk slowly. Pushing both sticks forward would move run forward, one forward and one back would turn you, and both back would make you retreat. Pushing the sticks together would allow you to block, while pushing them apart would make you jump. Each stick had a trigger button, with you attacks being allocated to using them separately or together to do different things.

The game was played by dashing around a small 3D arena, and most dash attacks home in on your opponent. You and your rival would zip in and out of attacks, sometimes behind barriers of sorts, and attack with a wide array of weapons. Your weapons changed depending on your situation, so for instance you could shoot a single shot while standing. If you were dashing to the side, the same button would fire off three shots. Dashing towards or away from your opponent, grounded or in air might all provide different attacks. Keeping your opponent in your sights was a difficult task, as both of you are usually blazing fast. Because dash attacks typically home in, they will also turn you towards your foe. Jumping also turns you directly to face your challenger, so movement is always dynamic.

My personal favorite was an air dash attack right at your enemy would make VR Temjin (the “Ryu” of the game) jump on top of his sword and surf it into your opponent. Landing this attack would do tons of damage. The game moves at a furious pace, with intense screeching sounds coming from your jets. The pleasant music doesn’t match the mayhem on screen, but it sounds so delightfully Japanese that it does feel right at home with the mechs. A very nice touch is that your mechs are powered by Sega Saturns on their backs, with the disc door open. You can see a little CD spinning around as they blaze through the arena. In the Dreamcast sequel, it’s a Dreamcast, naturally.

Great designs from a Mech Master

Famed Mech artist Hajime Katoki is responsible for the designs of this series. In addition to Virtual-On, he also worked on entries from the game series Super Robot Wars. Hajime did the designs for the graphic novel Gundam Sentinel, and worked on the OAV, Gundam 0083. There, he created most of the Gundam designs. He also worked on V Gundam and G Gundam, as well as the redesigns for the Gundam Wing: Endless Waltz movie. His works are also seen in Patlabor 2, and he often does work for the model kits of Gundam figures. Other artwork can be found in the X68000 version of Gradius II, (The X68000 was a Sharp released home computer only sold in Japan) and the EMPS Mecha fromt he game Policenauts by Konami. 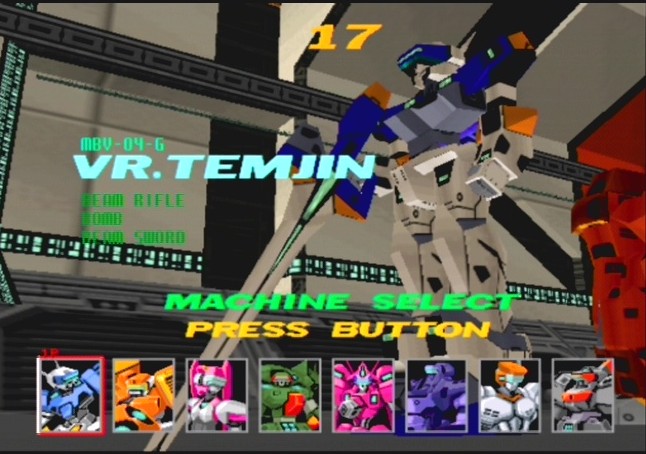 The character select screen gives you a good look at all of your choices, as all the Cyber Troopers are lined up in a hangar. You cycle through them, and when you choose a combatant, the fly off to battle. It feels great, and adds a bit of soul to what usually feels like choosing a character off a bingo card.